Hello and welcome to my blog. It’s nice to see you.

It’s always tricky trying to write during the summer holidays. Routine’s abandoned and finding forms of entertainment becomes the new priority. So, whilst Tom is at his intensive swimming lesson, I’ve got just enough time to tell you about my current project, a non-fiction book.

I’d never written a book before, so I’ve made lots of naive errors.  However, those frustrations are in the past, and I’ve now nearing the end and will shortly create a dedicated Facebook page to see if anyone is interested in it.

The book is a mixture of a soldier’s war memoir, and a record of the Field Ambulance in which he served from 1940 – 1945.

This is the soldier. 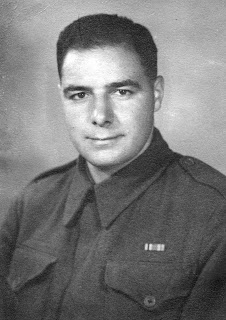 His name is William Earl, and this is what he looked like in 1943.

I call him Bill, and this is him now. 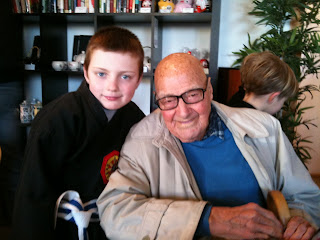 It’s taken four years to write and research Bill’s book, and in that time, countless other projects have been shelved. Periodically, I’ve resented that. My heart lies in writing original drama and I’ve wanted to develop a feature film idea and extend my short play into a long one. I’ve had to withdraw from Wordfest because, as Bill gently reminded me, at 98-years-old, you’re on the Grim Reapers’ to-do list. Besides, Bill has been very patient.

So, this summer, I am determined to write Chapter eight, from Egypt to Rome, which deals with the aftermath of Bill’s evacuation from Anzio, an afternoon of pleasure in Rome, and his departure for the next stage of the Italian Campaign.

Chapter eight marks Bill’s final transformation from a civilian to a soldier. Although the Field Ambulance is still of the Army, not in the army, the final fragments of Bill’s trusting and optimistic nature are blasted out of him in Anzio. From then on, life’s goals are simplier: to help save as many men as possible and survive along the way.

The Italian Campaign was bloody, bitter, and, on occasion, fought in conditions worse than Stalingrad. In such circumstances, he’s forgiven for losing his self- control. It happens when he was working alongside a doctor at an Advanced Dressing Station on the Adriatic Coast. The troops engaged the enemy and only light casualites were expected. However when they arrived, the men’s injuries were far more severe than anticipated. The function of the two treatment tents, A and B, were quickly revised. A tent became that in which the men were to be treated, and B, for those who would be made comfortable and left to die.

As a Nursing Orderly, Bill’s role was to put the unsuspecting men where ordered. For hours Bill shuttled between A and B tents, helping the doctor save lives in the former, comforting the dying in the latter. He spent most of his time with the dying, wondering what their families would think of it all. He only left them when a new batch of wounded men arrived, and the whole process was repeated.  It’s under these circumstances that Bill furiously rants at God; how could He let this happen? How is this good? What is the point of this?  It’s one of his blackest moments of the war, and one he shared only after many hours of interviews.

My stories are fripperies compared to his, so that’s why I’m going to write the best book I can. After that, I’m going to list all my earlier errors in a book called, “How not to write a book,” but for now,  I’ll balance writing chapter eight, with carefree trips to see Circus Wonderland at Adur Rec and The Selfish Giant  Maze at the Royal Pavilion.

Thanks for dropping by. Have a great week and see you soon.

← What makes us human?
Whoosh! There goes another target. →