Hello and welcome to my blog. It’s lovely to see you again.
Today is Remembrance Sunday so whilst I finalise the blog on Ali Lapper, I want to revisit a blog published in November 2009 on William Bushrod.
William has lived in Shoreham for over 50 years and was a wireless operator in the Second World War. 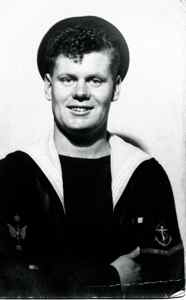 1945. William, leading wireless operator.
In 1942 he was working in Southdowns Bus Company in Portslade. He was already in the Home Guard and Sea Cadets so it felt natural to enlist to join the Royal Navy. Thus on 13th March Bill joined around 20 other 17 years olds from all over the country to train as a wireless operator.
It was a happy time as the men got on well, despite their varied backgrounds, accents and attitudes. Sadly for Bill though, it was short-lived. He suffered from tonsillitis between the final exams and being drafted, so whilst his classmates left for their ships, he was stuck in hospital and lost contact with them. In October Bill was finally drafted to HMS Europa, but it was on HMS British that he spent most of his naval career.
HMS British was the senior vessel in a group of four minesweepers on patrol between Cromer and Flamborough Head when Bill was there. The minesweepers were responsible for clearing mines dropped in the shipping lanes. They did this by trailing gear behind them that severed the wires connecting the mines to the seabed. As the mines floated to the surface, they were sunk or exploded.
Bill, as wireless operator on the senior vessel, was responsible for organising the watch for the entire group. Nine out of ten orders were for a silent watch because their patrols were at the top end of E-boat alley. The E stood for enemy and the boats were the German equivalent of allied Patrol or Motor Torpedo Boats. Their official name was Schnellboot,(fast boat), and they had a formidable reputation in the Royal Navy. They dominated night warfare in our coastal waters. Elusive, stealthy and fast, they silently sought out allied vessels and ambushed them. Bill witnessed their effectiveness first hand when an E-Boat ambushed one of their minesweepers. Only the nameplate was left, HMS Cap D’antifer.
After being briefly drafted to a Drifter, Bill returned to shore and at HMS Mercury trained to become a leading telegraphist (wireless operator). In September 1944 he returned to sea, joining HMS Barcley Castle on convoy escort and anti-submarine patrol. She patrolled the western approaches, picking up the convoys in the Atlantic and escorting them back to England. With customary understatement, Bill says, “It wasn’t so dangerous then as things had quietened down.”
It was whilst HMS Barcley Castle was close to the Channel Islands, that Bill picked up the broadcast to the Germans telling them to prepare to capitulate. He took down every word and sent the message up to the Skipper. War had ended and the ship’s company was jubilant. At the end of their escort they were ordered to go to a Loch in Scotland. When they arrived they joined 14 other naval vessels escorting 8 German submarines down to Belfast. It was an impressive sight.
He says of his war experience, “it taught me a lot in so many different ways. How to get on with people of different backgrounds, ways, outlooks and opinions. I enjoyed it to a great extent and I appreciated the service part. I gained promotion. I learnt how to act in charge of other people.”
Now approaching 90, William was one of the hundreds of local people who gathered at the town’s Cenotaph this morning to remember the dead. He may also be at Shoreham Fort tonight for a candlelit Remembrance Service. I will be there reading “Taking a Stand” by John Bailey.
Next week, I’ll return to the series of blogs on disability.

Good-bye for now.
← A day in the life of Sussex Sailability
We will always think of disability in the same way. →