Hello and welcome to my blog. If you’re new, welcome, it’s nice to see you. If you’re one of my regulars, wonderful to see you again.

Well, here in the Independent Republic of.., it’s wet, cold and chilly. We’ve even lost our kite-surfers but we did see a hardy surfer out on Sunday. We stayed to watch, but he seemed content just to paddle about waiting for the super wave. We watched him watching the waves and we all waited, and waited, and waited. Our noses were running by the time we ambled off, disappointed.
I felt much the same way after attending the town’s Remembrance Day service.
On the upside, it was well attended and those coming to pay their respects took it seriously. Us spectators were also there in plenty of time. However, at 11 o’clock over half of St Mary’s congregation were still filing out of the church. The bugler had to cut across the graves to play the Last Post, late. It sounded pretty ropey but then again he’d hardly had the best of starts. Then the wreath laying commenced. The MC announced representatives who weren’t there, and some that were, didn’t know whether to nod or salute so made a weak show of respect and shuffled back to their places. The fireman who chewed gum throughout and stood with his legs astride and arms folded, summed it up for me. Apart from a few notable exceptions, it was all half-arsed. Surely it can’t be beyond us to get it absolutely right for just 30 minutes once a year? Someone needs to shake the whole thing up and knock a few heads together. Let’s start with a whip round for the Vicar. He can spend the money on a new watch.
As a timely reminder of what it’s all about, I want to introduce you to William Bushrod. He’s 86, has lived in Shoreham for over 50 years and was a wireless operator in the Second World War. 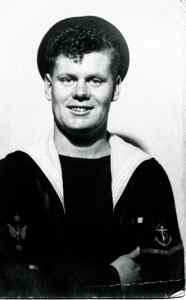 1945. William, leading wireless operator.
In 1942 Bill was working in Southdowns Bus Company in Portslade. He was already in the Home Guard and Sea Cadets so it felt natural to enlist to join the Royal Navy. Thus on 13th March he joined around 20 other 17 years olds from all over the country to train as a wireless operator.
It was a happy time as the men got on well, despite their varied backgrounds, accents and attitudes. Sadly for Bill though, it was short-lived. He suffered from tonsillitis between the final exams and being drafted, so whilst his classmates left for their ships, he was stuck in hospital and lost contact with them. In October Bill was finally drafted to HMS Europa, but it was on HMS British that he spent most of his naval career.
HMS British was the senior vessel in a group of four minesweepers on patrol between Cromer and Flamborough Head when Bill was there. The minesweepers were responsible for clearing mines dropped in the shipping lanes. They did this by trailing gear behind them which severed the wires connecting the mines to the seabed. As the mines floated to the surface, they were sunk or exploded.
Bill, as wireless operator on the senior vessel, was responsible for organising the watch for the entire group. Nine out of ten orders were for a silent watch because their patrols were at the top end of E-boat alley. The E stood for enemy and the boats were the German equivalent of allied Patrol or Motor Torpedo Boats. Their official name was Schnellboot, (fast boat), and they had a formidable reputation in the Royal Navy. They dominated night warfare in our coastal waters. Elusive, stealthy and fast, they silently sought out allied vessels and ambushed them. Bill witnessed their effectiveness first hand when an E-Boat ambushed one of their minesweepers. Only the nameplate was left, HMS Cap D’antifer.
After being briefly drafted to a Drifter, Bill returned to shore and at HMS Mercury trained to become a leading telegraphist (wireless operator). In September 1944 he returned to sea, joining HMS Barcley Castle on convoy escort and anti-submarine patrol. She patrolled the western approaches, picking up the convoys in the Atlantic and escorting them back to England. With customary understatement, Bill says, “it wasn’t so dangerous then as things had quietened down.”
It was whilst HMS Barcley Castle was close to the Channel Islands, that Bill picked up the broadcast to the Germans telling them to prepare to capitulate. He took down every word and sent the message up to the Skipper. War had ended and the ship’s company were jubilant. At the end of their escort they were ordered to go to a Loch in Scotland. When they arrived they joined 14 other naval vessels escorting 8 German submarines down to Belfast. It was an impressive sight.
Bill had several postings to Germany between the end of the war, and being demobbed on 17th May 1946. When he returned home, he went straight to the pub to see if his mates were back. After taking in the human cost of the war, he had to find a job. After a brief stint as a jobbing builder, he re-joined Southdowns Bus Company in 1948. He was offered a post in his original department and was gradually promoted, eventually becoming the departmental head. After 38 years service he took voluntary redundancy. He was 62.
Bill married the daughter of a navy man and they have been together for over 58 years. They have 2 children, 4 grandchildren and 2 great grandchildren. He and his wife lead a full life and he has the honour of being the oldest auxiliary watchman at the N.C.I.
He says of his war experience, “it taught me alot in so many different ways. How to get on with people of different backgrounds, ways, outlooks and opinions. I enjoyed it to a great extent and I appreciated the service part. I gained promotion. I learnt how to act in charge of other people.” He wasn’t to be drawn on the sadness of friends and comrades lost and at 86, why should he be?
Bill was at Shoreham’s Memorial service on Remembrance Sunday, smart as a new pin in his N.C.I uniform and service medals. He attends every year to pay his respects to his former comrades.
Thank you Bill for sharing your experiences with me and for your service during World War Two.
Have a good week everyone and see you next Wednesday.
← Guerrilla Blog
Reporting for blog Sir →