This blog first appeared in 2017 and forms one of six parts on how I wrote Blood and Bandages. It’s designed to tell the inside story of the book to its many fans and to inspire new writers to have faith in their stories, keep going despite setbacks and follow their passion.  I’m not special. If I can have my first book published, so can you.

I hope you enjoy part one. The next one will appear on 3rd February 2022.

I never meant to write a book.

When I met William Earl in 2009, I was still basking in the glory of graduating from the University of the Arts London with an MA in screenwriting.  Within a year of graduating, two of my short films had been produced, my first play had been performed in Adur Arts Live and I was working with a renowned script editor on a feature film. Life was exciting and I was looking forward to a future in screenwriting. Then I met 94-year-old William Earl.

I met William on Remembrance Sunday when I popped in to my in-laws to watch the BBC coverage of the commemorations at Whitehall. William was a neighbour for whom they cared and when I arrived, he was reminising about his time in the Royal Army Medical Corps during the Second World War. As I had featured a war veteran in a previous blog, I identified William as a potential interviewee. 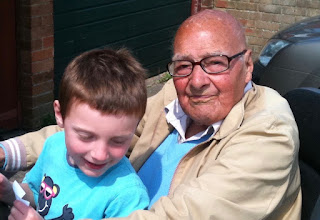 William in 2011 with our son, Tom, on Daisy, William’s mobility scooter.
At my request, my in-laws asked William if he wanted to be interviewed for my blog and a  meeting was scheduled for early 2010. When I arrived, William welcomed me into his tidy old fashioned home and while we looked at his unpolished medals he declared, “I’m a D-Day Dodger and I still hate Mark Clark for what he did at Anzio.” I didn’t expect that and instantly felt that this wasn’t going to be a pale interview full of facts but no fizz. For the next hour, William explained that he had been called-up to join the 214th Field Ambulance, 56th (London) Division in 1940 where he’d learnt the trade of a nursing orderly.  His job was to treat, collect and evacuate the wounded from the front line to the medical units further back. He illustrated their positions with pencil drawings and reeled off where he had seen action, North Africa, Salerno, Monte Cassino, Anzio, and the River Po. Even with my scant knowledge of the Second World War, I recognised the names of these major engagements. William was bursting to continue his story when the hour was up so we agreed to meet again. In fact, we subsequently met many times and gradually he divulged more intimate and terrifying experiences. I slowly became aware that I was hearing a unique story which deserved a wider audience. I told William that I wanted to tell his story, not in a blog, but in a book. He readily agreed, but what he had in mind was a pamphlet which he could give to his friends. I already knew that his story should be set in the context of his field ambulance and the Italian Campaign so I rejected that idea and instead offered to write his memoir with a view to getting it published.  He agreed and I stepped up a gear.

Firstly, I had to verify the facts. William’s army records were requested and checked. They supported William’s dates, role and locations. My husband and I clambered into William’s loft and recovered the letters he’d sent home from the front, his love poems to his beloved wife Mary and a stash of war photos. It was an enviable collection of first hand evidence upon which I could base the book. Next thing was to delve into the Italian Campaign to check William’s account of various events. They fitted. It was all coming together.

At that stage, I felt I could write William’s story while continuing to feed my passion for scriptwriting. That all changed in 2012. Contextualising William’s story within World War Two had only taken me so far and I needed to move onto the detail to really test the strength and accuracy of his story. Hence, in February 2012, I paid my first visit to the Museum of Military Medicine at Keogh Barracks, Aldershot. There I was shown all the World War Two RAMC training manuals and as I read who did what and where, William’s account of his role started to slot into the wider picture. What struck me most was the fact that the manuals were written by those who had served in the First World War for references were made to mistakes made in 1914 -18.  Next stop was the National Archives to read the 214th’s war diaries. They ran to hundreds of pages and I painstakingly photographed each one. When I got home I started reading them. There was so much material that I split it up into periods of three months, cross referencing each month with William’s interview notes, his photographs and his letters home. They confirmed William’s version of events. More surprisingly, I found myself being drawn into the world of the 214th and I started to care about the men about whom I was reading. 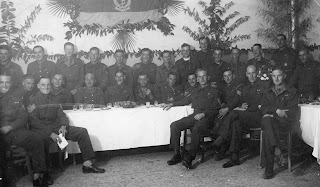 I laughed at the exasperation of the 214th’s first commanding officer who attempted to convert the recalcitrant new recruits to army life. I sympathised with Private Sherwood who made the heartbreaking decision to leave his badly injured friend, Private Mustoe, and save a lesser injured soldier. I cried when they found Mustoe’s body the following day. I felt the desperation of Major Johnson of the 167th Field Ambulance who repeatedly tried to reach a seriously injured officer before a town was surrounded by Germans. I shared the pain of the officers whose Christmas toast was to an infantry unit that had been decimated the previous autumn.
As I summarised and catalogued each entry, I felt a growing sense of obligation to tell their stories as well as William’s. However, to do that I would have to gain:-
1.     a much broader understanding of the Second World War in the west
2.     a detailed understanding of the Italian Campaign and the 56th London Division
3.     an expert level of understanding of the operation of a field ambulance, and most painfully of all,
4.    put my beloved scriptwriting on hold, let my industry leads go cold and allow the MA skills, so  diligently honed over two years, atrophy.
I had boxed myself into a corner and I now had to choose between passion and obligation.

← Singapore ex-pat’s guest post by Penny Graham, CEO of CareerSeekers
Writing Blood and Bandages – fighting for life in the RAMC Field Ambulance 1940-46. Part two: “Its heart was buried under a mountain of facts.” →

4 Responses to Writing Blood and Bandages – fighting for life in the RAMC Field Ambulance 1940-46. Part one “I never meant to write a book.”